Happy to release 3.1.9 stable, which incorporates Betas .6 .7 .8, which introduced a number of new functions for Breadboard, but before we get into the new stuff and things, we would like you to guess what this is.

We would also like to give you good peeps a basic explanation of each function, these are by no means for only playing sound.

You can set up your construct to listen to an event such as CRAM fired [yes/no] if yes change the AI to broadside: imagine a spinal mounted CRAM and when it fires you want the construct to turn and broadside for X seconds which X is the reload time and swap back to point at AI.

Event input listens to various vehicle events such as weapons being fired and outputs the value of events on a particular frame of the simulation.

The event input does not need anything attached to it as it listens to the events triggered from the construct itself after choosing one from the list.

Read without resetting to 0, toggle this to allow the value of the event to increase indefinitely rather than resetting once read. Useful for knowing the total amount of damage sustained.

Inspection period X seconds, the time between checks. On frames when it’s not checking it will output 0. A larger period can be useful for accumulating a larger sample of events (such as damage from an explosion).

Accumulator (with threshold), The first output is the sum of the first input over time. The second outputs is a trigger value of 1 when a threshold is reached. Reaching the threshold resets the counter. 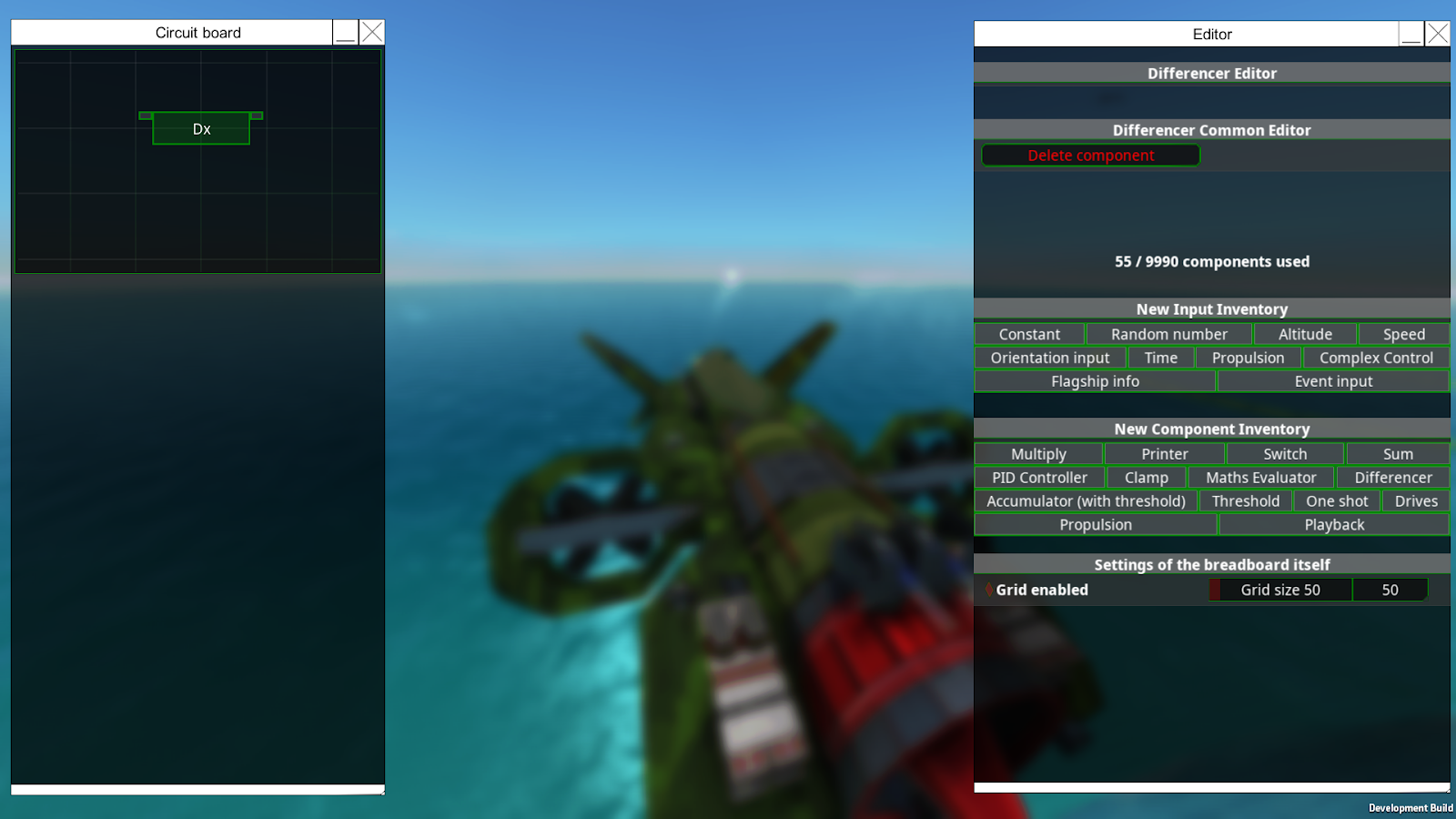 The Differencer outputs the change in input since the last frame.

One shot will only pass a non-zero input to the output once. The output will be zero after this.

This would be used mostly when you want to play a sound once, or trigger an action once. Adding other components such as event input, threshold and playback(described further down) would allow you to play a sound or action once if you have a set of CRAMs firing. If you do not add the one shot then a sound would be played per CRAM fired. The threshold in this case would be the volume of CRAM fired.

Playback plays a sound clip when the first input is above 0. The second input can be used to adjust volume and the third can be used to adjust pitch. As you can see from the list on the right, we have many test sounds to choose from which were implement for testing as you can add your own sound clips using #tags as you can see from the centre section where we call up the sound #miho_start.

Any input above zero will play a sound file. The output link is used to snake playbacks together, such that you can have it play something and then between 3 and 5 seconds later play something else.